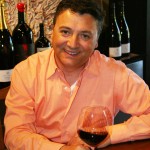 Vinity Wine Company’s intimate relationship with the world of Italian wine is rooted in the background of our company’s President and driving force: Dino Capriotti. It was in his family’s vineyard in the medieval, coastal town of Offida, Italy that Dino Capriotti first developed his love for wines that express unique regional qualities. He carried this passion from his native Marche region with him throughout his first career as a successful restaurateur in Europe and later in the United States, carefully selecting the finest wines for patrons at prices that delighted. In 1986, Dino fell in love with the San Francisco Bay Area and decided to begin a new career in the wholesale wine industry. His great knowledge of wines made him an immediate success. Dino brings to Vinity Wine Company more than 25 years of experience in the business and has successfully grown the company since he opened its doors in 1999. In Dino Capriotti, you will find one of our industry’s most dynamic personalities: a trusted and reliable businessman who understands the demanding, ever-changing California marketplace. His enthusiasm for sharing his knowledge of fine wines is infectious — only one of the reasons why many wine professionals consider Dino to be one of the best in the business.

Not many people can say they got their start in the restaurant industry at Chez Panisse. Jon Bates recalls filling in for a busser one night only to be asked back a couple of weeks later. After six months, he was training bussers and working four nights a week in high school. Bates continued at Chez Panisse on and off for nearly ten years, working through high school, during college at UC Berkeley, and in between travels to Southeast Asia. He later joined the team at Oakland’s acclaimed Oliveto restaurant, first as a server and later as Wine and Spirits Director, focusing on wine education and hospitality management until moving to Santa Cruz.

He joined Vinity after seven years at Southern Wine & Spirits, focusing on imports and a stint as a wine consultant. He lives with his wife and two teenage sons in Santa Cruz. While his career has been mostly defined by wine, he still takes great joy in all things culinary. You might find him at the farmers market, working in his garden, cooking or foraging – closely followed by a glass of wine.

Stefano was born and raised in Piacenza, Italy. In 2009 he completed the Association of Italian Sommeliers Level 2 program. By the end of 2010 he moved to Temecula California and, after working for some local wineries and restaurants, he started his own wine brokerage business: Sipiens.com. He has represented Vinity Wine Company’s portfolio in the San Diego area since 2017.

In his spare time he teaches “Wine Hospitality” at Mount San Jacinto College where he also coordinates the wine education program. Since 2016 he’s been teaching the “Italian Wines” class at San Diego State University and he also teaches for the North American Sommelier Association through which he achieved the “Italian Wine Specialist” certification. He is also the founder of B.T.W. (Blind Taste Wine), a group of San Diego wine professionals that meets periodically to taste and evaluate wine.

Leif’s passion for all things Italy began in 1997 with a summer in Perugia, Umbria for a full immersion Italian program. What began as a way to kill a year’s worth of language credits altered his life forever. Leif changed his major to Italian and earned a B.A. at the University of Oregon and eventually an M.A. from the University of Wisconsin, Madison. His studies included more summers in Perugia and a year with Syracuse University in Firenze. Naturally, so much time living in Italy cultivated an intense passion for Italian wine and gastronomy. This lead to many years in the restaurant industry while residing in NYC and SF. After a year of guiding cycling tours in Italy in 2011, Leif returned to SF and pursued a career in wine sales. He is an Italian Wine Specialist certified by the North American Sommelier Association and has cultivated a sterling reputation in the SF wine scene as a reference point for Italy. In his off time Leif loves cinema, cycling, hiking, skiing in the winters and mixing vinyl records as a long-time DJ.

Grace Gaboury was born and raised in Cleveland Heights, Ohio.  She graduated from Ohio University with a Bachelor’s Degree in Education and a serious longing in her heart for her first love: food and wine.  After moving west and working in restaurants in Colorado, she continued her travels to California. There, Grace began working at The Tasting Kitchen where she studied wine formally and certified as a Sommelier.  She continued her career as wine buyer and Sommelier at Nancy Silverton’s popular eatery, Chi Spacca.  Here she honed her skills and love for Italian wine, food and culture.  Grace was excited to join the VINITY team in 2019 in a continued effort to search for growth and excellence in her career.

Sandro was born and raised in Rome but his family roots are in a little town north of Lazio region, half an hour from Tuscany and famous for olive oil production. He has a degree in Political Science from University of Rome and post graduation Business degree in Marketing at UCSD. His great passion for food & wine drove him to earn a Sommelier degree from the Association of Italian Sommeliers in Rome.

After working a few years in Catering and Banqueting events, in 2018, he decided to join Dino and represent the great profolio of producers that Vinity Wine Company represents.

After 31 years slinging cases at Young’s Market, Victor Vacanti is our resident wine expert on the central coast. He’ll tell you Piedmont and Tuscany are his favorite regions but we secretly know Sicily has stolen his heart. When he’s not captivating everyone in spandex, he’s swimming, collecting vinyl, traveling, eating, and sometimes selling wine.