Trentino-Alto Adige is Italy’s northernmost region.  Walled in by the Dolomites and the Rhaetian Alps, only about 15 percent of the region’s land is cultivable and much of it is used to produce fruit and wine grapes.  The difficulty of growing vines on steep, often terraced hillsides compels growers to emphasize quality.  About three quarters of production is DOC and a major share of the wine is exported.

Trentino-Alto Adige, which borders Austria and Switzerland, is split into two distinct provinces.  Trentino, around the city of Trento to the south, is historically Italian in language and culture.  Alto Adige, around the city of Bolzano to the north, is know as Sudtirol to the prominent German-speaking population.  The South Tyrol, historically part of Austria, is officially bilingual.

Although experts agree that the Alpine climate favors grapes for perfumed white wines, the historical emphasis has been on reds, which still account for more than half of the region’s production. 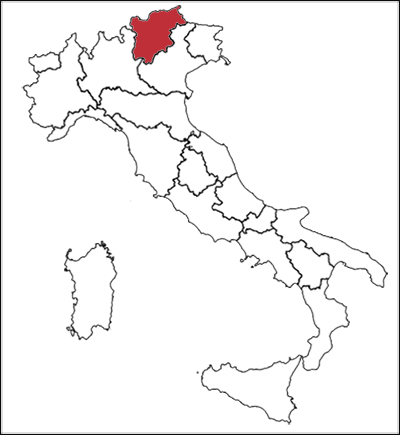