Genova la Superba, nothern Italy’s busiest port, is the axis of a slender strip of a region that clings to the walls of the Maritime Alps and Apennines as they arch over the Ligurian Sea between Provence in France and Tuscany to the south.  The rugged terrain of this slender seaside region makes grape growing a challenge, meaning that vineyards are scattered along the Italian Riviera and wine production is limited.  The region makes less than half of one percent of the nation’s wine.  Still, even if hard to get to, some of the wines of Genoa’s region are well worth the search.

In a region where most wine is still made at artisanal or family levels, growers have developed an amazing range of individual styles in working their vineyards.  Their loyalty to local vines and time tested methods of training them makes their wines as distinctive in personality as they are variable in quality and style.  Vineyards are similarly diversified.  Custom favored pergolas to the east and alberello, low head or spur training, to the west where the French influence is felt.

Near La Spezia and crossing the boarder of Tuscany is the DOC zone of Colli di Luni where red and white wines, notably Vermentino, show class.  The Lower Magra and Vara valleys have calcarous clay soils in the region’s most productive vineyard area, home to the Colli di Luni DOC zone.  The elevation to DOC in 1989, reconfirmed a way with wine that had been know along the Magra valley and the Gulf of La Spezia since the Romans settled in Luni.  But Liguria’s most productive vineyard area had been overshadowed in later eras by Cinqueterre.  Even before DOC, estates had been making good red wines from blends based mainly on Sangiovese and whites from Vermentino that outshone most of Cinqueterre and could rival the best of the Riviera di Ponente. 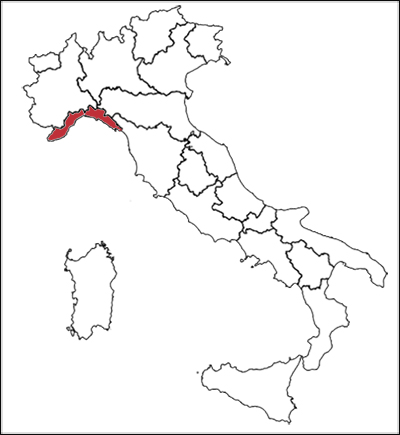