Calabria is located at the southern end or “toe” of Italy.  Calabria and its wines have been subject to many influences over the centuries, most notably that of the ancient Greeks, who cultivated the first wine-bearing vines here.  For many centuries Calabrian wines were famous not just in Italy, but also in other European countries.  Their glory began to dissipate, however, as competition arose from the French.  Calabria is a rural region and its economy is dependent on cereals, citrus and particularly olives.  Viticulture and wine making are far from the vital industries they once were and account for only a small portion of the land use.  The local landscape is mountainous and this has led to fragmented land ownership and widely dispersed vineyard zones.  Without effective co-operatives, wine production is prohibitively expensive.   The region is home to 12 DOC titles but no DOCGs.  Most areas favor Gaglioppo and Greco Nero for their Red wines and Greco Bianco, Trebbiano Toscano and Malvasia Bianca for the whites.  Sicilian varieties such as red Nerello Mascalese, Nerello Cappuccio and white Ansonica are increasingly popular and suit the Calabrian terroir well. 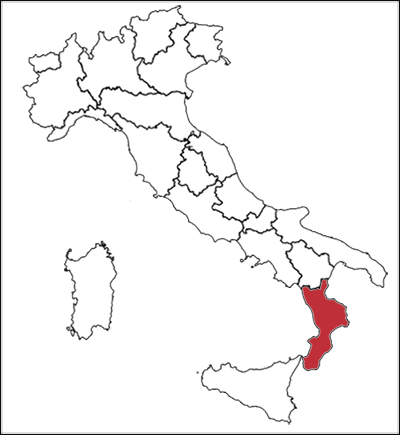