Venice’s region has emerged in recent times as Italy’s largest producer of wine with a major quantity classified as DOC or DOCG.  Leading the flow is Verona’s famous trio of Soave, Bardolino and Valpolicella.  But since DOC represents about a third of the total, Veneto also figures as a major producer and exporter of IGT wines, often of moderate price.  The Veneto has three general areas of premium wines production: The western province of Verona in the hills between Lake Garda and the town of Soave; the central hills in the provinces of Vicenza, Padova and Treviso; and the eastern plains of the Piave and Tagliamento river basins along the Adriatic coast northeast of Venice.

Valpolicella, made from a blend of Corvina, Rondinella and Molinara grapes, has been fourth in volume among DOCs.  Valpolicella is noted as a hearty red to drink relatively young, though grapes from its vineyards in the hills north of Verona can also be partly dried and made into the richly dry Amarone della Valpolicella.  Amarone, amply structured and lon on the palate, ranks among Italy’s most authoritative red wines with a list of admirers growing around the world.  It is unquestionably one of the great red wines for aging.

Treviso’s province takes in the hills north of Venice between the towns of Conegliano and Valdobbiadene, noted for the popular Prosecco, a dry to softly sweet white, almost always bubbly. 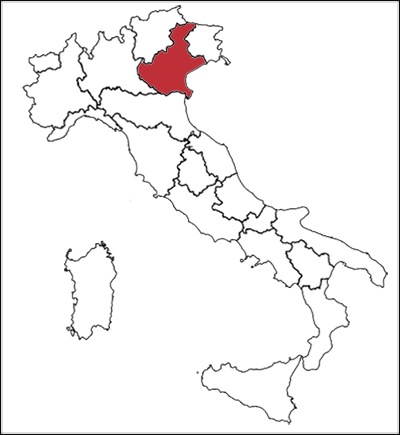