The Marche region is located in the center of Italy, between the Apennines and the Adriatic Sea. Although the Marches are not a large region (less than 10.000 Km2), visitors can admire an outstanding range of landscapes: from the sea to the hills, from the valleys crossed by several rivers to the tops of the highest mountains. Thanks to this variety, this region differs considerably from all the other Italian regions. In the hilly area west of the port town of Ancona we find all the right ingredients for growing Verdicchio grapes: gentle hills ranging from 400 to 1,000 feet in elevation, hot climate mitigated by the sea breezes blowing off the Adriatic. The Apennine mountain range looms in the horizon, the sea is just at the right distance and the soil has the right mix of clay and sand to give this territory all the conditions to make great white wines.

Verdicchio is the best seller among the wine of this peaceful Adriatic region.  But the Marche’s long-time devotion to whites no longer obscures the merits of its reds.  Once just a fresh flavored fish wine, a new style of Verdicchio has emerged as a white wine of distinguished character, with impressive depth and complexity with age that Verdicchio is increasingly ranked among the noblest native white varieties of Italy.

Red wines of the Marches are based chiefly on Sangiovese and Montepulciano – sometimes blended, sometimes not.  The most important in terms of volume is the Rosso Piceno, dominated by Sangiovese.  It comes from a DOC zone covering much of the eastern flank of the region, stretching from the superiore area between Ascoli Piceno and the sea north through the coastal hills to Senigallia.  Rosso Conero, dominated by Montepulciano, has gained even more praise, thanks to the devotion to quality shown by its leading producers.  It originates in a zone on the slopes of the Conero massif south of Ancona.  Both Rosso Conero and Rosso Piceno were habitually made to drink within two to four years, when they are persuasively round and fresh in flavor.  But certain producers have made wines that age remarkably well from good vintages – sometimes for well over a decade.

Offida received the DOC label in 2001.  The production area is the hills north of Ascoli Piceno and south of the River Aso and includes both red and white wines.  Offida Rosso is produced from a Montepulciano and Cabernet blend.  The white wines from Offida  include Offida Pecorino and Offida Passerina. 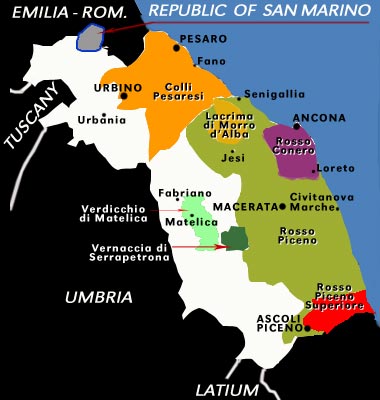 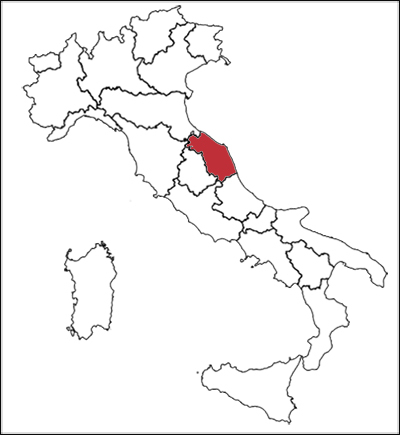