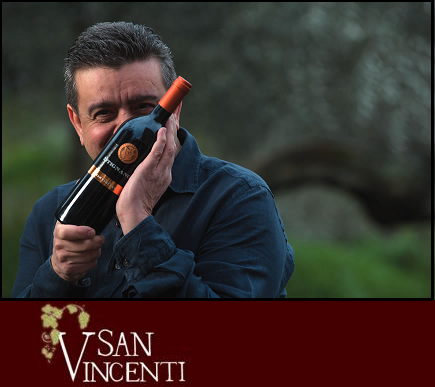 The territory of Gaiole in Chianti. Gaiole in Chianti extends over 129 square kilometers (50 sq. m.) in a hilly zone stretching from the Chianti Mountains—with altitudes up to 800 meters (2,625 ft.)—to the western bank of the Arbia river. The city’s center is perched at an altitude of 356 meters (1,168 ft.). Gaiole in Chianti is bordered by the communes of Cavriglia, Montevarchi, Bucine, Castelnuovo Berardenga and Radda in Chianti. It has 2,332 inhabitants and about 33.6% of the working population is engaged in agriculture, primarily the cultivation of grapes and olives. The history of Gaiole in Chianti. The settlement undoubtedly originated in extremely ancient times, as attested by numerous place names of Etruscan and Latin origin as well as by archaeological evidence found at Cacchiano (remains of a 2nd- and 3rd-century cemetery) and at the San Marcellino parish church. The ancient settlements would seem to have been concentrated in the communities of San Giusto in Salcio, San Polo in Rosso and Spaltenna, in the medieval diocese of Fiesole, and San Vincenti at Arezzo. All these parish churches have preserved their original floor plans as well as highly interesting traces of Romanesque structures. Many of the parish chapels controlled by those churches are also noteworthy for the same reason. The countryside around Gaiole is dotted with many castles due to the strong influence of the Firidolfi family, from whom the Ricasolis are descended, and later, by the Florentine Republic’s need for defensive positions. In some cases the ancient castles have been transformed into villas. Among them are Meleto, San Donato in Perano, Rentennano and San Giusto alle Monache. Brolio castle, cradle of the Ricasoli family, is a special case. Its defenses were rebuilt near the end of the 15th century, perhaps by Giuliano da San Gallo, and were one of the first examples of ramparts supplemented by bastions. Baron Bettino Ricasoli rebuilt the castle in the 19th century, converting it into a villa in neo-Gothic style. The existence of so many castles in the immediate area was responsible for the rise of Gaiole as a marketplace. It is located on the valley floor along the road leading from the Chianti area to the upper Arno Valley. Gaiole is mentioned for the first time toward the end of the 11th century. As clearly shown in a drawing included in the collection of “Maps of Parishes and Their Thoroughfares” of the late 16th century, the town developed outward from its central piazza. It has the shape of an elongated triangle and the local shops open onto the square

San Vincenti farm is located on an area of 148 acres in Gaiole in Chianti at an elevation of 1400 to 4500 feet above sea level. The owner of this charming privately owned winery in Gaiole in chianti is called Roberto Pucci, a 70+ year old dynamic entrepreneur from Prato, who became enamoured of the beautiful Chianti area a few years ago and  decided to dedicate all his resources to the production of wine with great character. Leading this project is a sacred figure of Italian oenology, Carlo ferrini, a total connoisseur of Chianti Classico and creator of cult wines known and appreciated by lovers of wine from all over the world.

San Vincenti winery owns two vineyards:  STIGNANO  which extends for 14 acres. Half of the acres are planted mainly with older Sangiovese grapes and the other half is entirely planted with newer Sangiovese.  LE CORTICELLE has 5 acres planted wth Merlot grapes. The soil of this area is a mixture of clay and calcareous rock called galestro.