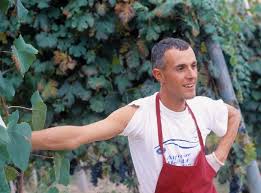 “My father, Adriano, is the youngest son of Natale and Teresa Vacca. Our family has lived in this region for generations. Like many families in the Langhe, we speak Piemontese as our first language and Italian as our second. Some of the grapevines we manage today were planted by my great grandfather.”

Domizio Cavazza was the director of the Royal Enological School in Alba from 1888-1913. When he arrived, he surprised everyone by purchasing land and making his home in Barbaresco. The noble families expected that he would reside near the more famous estates in Barolo. Cavazza, though, was a very outspoken and charismatic man, as well as being an enthusiastic supporter of the farmers in the Langhe sub-region. Cavazza celebrated the birth of his first son by planting what now has become a well-known landmark; a large, Mediterranean Pine tree. The estate became known as the ‘Cantina del Pino’.

Renato Vacca’s great grandfather purchased the vineyards after Sig. Cavazza prematurely died and his family moved to Torino. The Vacca family has been here ever since. 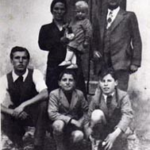 Four generations of Vacca family members have produced grapes here at the vineyards, which are clustered around Ovello hill. The property’s alkaline limestone soil composition and unique microclimate produce a structured, age worthy Barbaresco wine. The Vacca family uses no chemical fertilization, no pesticides either, nor herbicides. They manage the details in production and control with a hands-on mentality that follows the older natural ways that respect that same land.

Adriano and Renato Vacca, father and son, operate the winery together. Adriano is the littlest brother in the above picture, being held by his mother. Adriano was also one of the founding members of the area cooperative Produttori del Barbaresco. For many years they sold their own grapes to the organization. Renato completed his wine making education as well as five years of work experience at the cooperative. In 1997, the father and son decided to produce their own wine.

The importance of the different aspects of the conditions regarding the wines are described by Renato in this video. The two vineyards, Albesani and Ovello

The tastiness of Cantina del Pino’s wines are a testament to the skills that were gained from generations of experience in the field.